A key feature of the Annual Health Current Summit & Trade Show is the presentation of the annual Health IT awards. The Health IT Leader Award recognizes an outstanding leader in advancing healthcare through health information technology and health information exchange. The Health IT Innovation Award recognizes an organization that has demonstrated innovation in the use of health IT and HIE technology to improve healthcare and quality.

Dr. Croft was one of the leading physician champions for the early adoption of EHRs, and his video testimonial was one of the primary recruitment tools for Arizona’s Regional Extension Center. He also was an early supporter of HIE in Arizona, hosting regional meetings of northern Arizona providers. His Flagstaff medical group, East Flagstaff Family Medicine was among the first group of community providers to be connected to Health Current, where they have integrated HIE alerts and the HIE portal into routine workflow. Dr. Croft was a leader in advocating HIE participation among other providers, regionally and statewide. In addition, Dr. Croft has been a Board Member of the Arizona Osteopathic Medical Association where he has been an advocate for health IT and HIE adoption.

El Rio Community Health Center serves as one of the largest federally qualified health centers (FQHCs) providing primary medical, dental and behavioral health services with 12 campuses in southern Arizona, serving over 95,000 people. El Rio was an early adopter of EHRs and one of the first FQHC to network all of the campus locations in one system. El Rio was one of the first organizations to sponsor health information exchange (HIE) in Arizona – the Southern Arizona Health Information Exchange. One of the first participants in Health Current, El Rio was the first FQHC to send data to Arizona’s HIE. El Rio was featured in a breakout session at the Health Current Summit & Trade Show, presenting their development of “enhanced alerts” in collaboration with Health Current – a technology that enables a seamless care plan as patients move from acute hospital care to follow-up medical and behavioral health care. 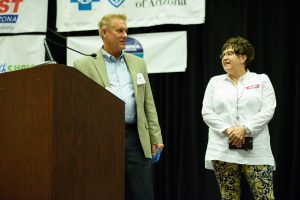